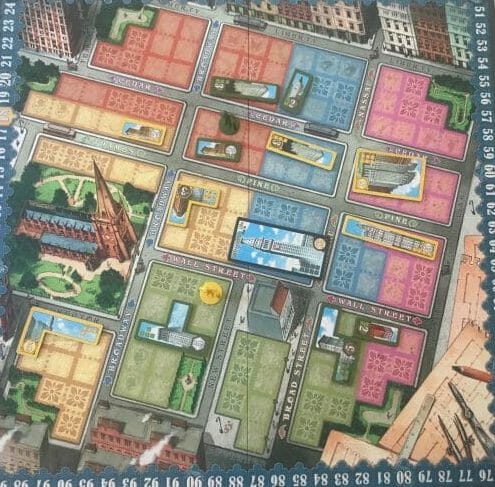 Imagine for a moment, the various parts of a car. We have obvious pieces, things like the tires and engine. Thinking deeper we might find items like the steering wheel or headlights. Without these pieces combined together, we don’t have a car. Board games are similar.

Tabletop games are a collection of standardized rules that we call “mechanics.” By combining mechanics, designers attempt to create an engine that runs smoothly every time. While most players are familiar with mechanics like “roll and move” in games like Monopoly (i.e. rolling a die to move a number of spaces), there are a whole host of others, with more being created all the time.

The purpose of this article is to help familiarize yourself with some of the most popular mechanics so that you can more easily understand the rules at a glance. If you’re interested in designing it’s integral that you’re able to combine mechanics in new and interesting ways.  In order to make the idea of mechanics clearer, we will use examples of games that illustrate the variety of mechanics we will discuss.

Basic mechanics you will see in a lot of games

Actions: Simply put, “actions” are the things you do on a turn. From playing cards to moving, most games define a variety of options for actions you can perform. Often players only get a set number of actions per turn.

Capture/destroy: In many games, including Chess, pieces can be removed from the game. While it may be as simple as moving on to them, other games include health points, armor, or a whole host of subsystems to dictate when pieces are removed.

Turns: Most games see players taking turns wherein they perform a number of actions until their turn ends, giving someone else an opportunity to do the same. Often a game has a set number of turns that will be completed before the game ends.

Victory Points (VP): Often, players need to score the most points to win a game. VPs, as they are called, can often be earned in a number of ways by fulfilling certain goals or quests. Sometimes a player will immediately win if they earn a set amount of VP. 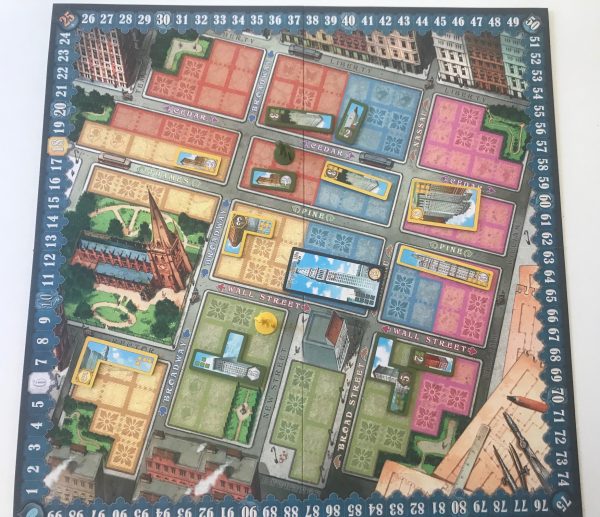 Pin on your medals and twirl your mustache it’s time to take over some land! Area Control is a ruleset that typically lends itself to war games like Risk. Simply put, it is the attempt to secure majority control over parts of the board. Typically this involves sending armies to invade other player’s territory. Still, there are plenty of games that don’t take such a cutthroat path, many simply involve holding a majority of influence in these areas. Experts will use their limited pieces to take as much territory as possible. 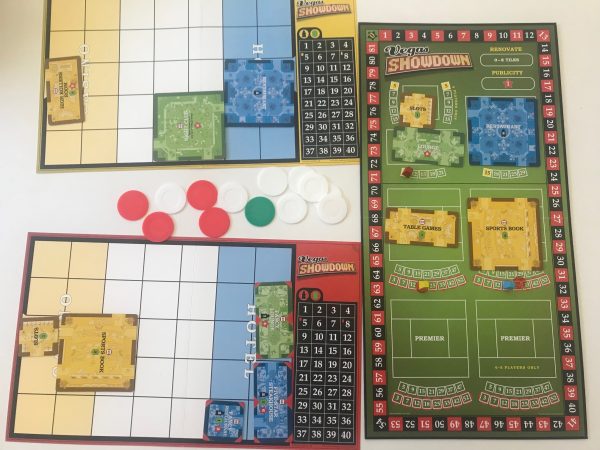 Going, going… gone! Unleash your inner auctioneer with this style of game. To win, players must carefully spend their money to win auctions against other players. These auction lots might include points, bonus cards, or tiles, that can used to win. The best players will know how much to spend and when to spend it. 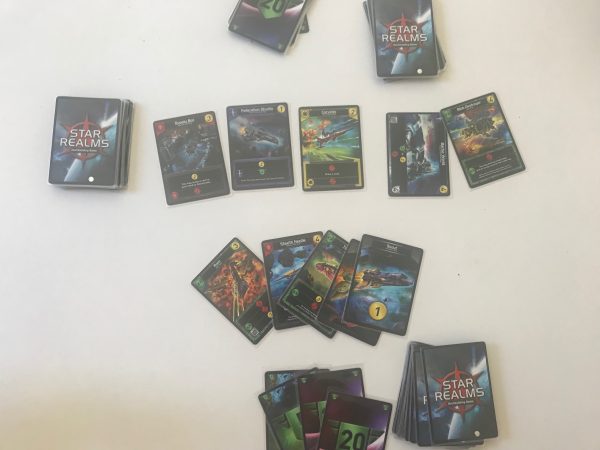 Cards games like Magic: the Gathering pride themselves on their customizability, allowing players to create decks based on a nigh-infinite number of combinations. Deck-Building games condense the feel of these games to a shorter experience. Starting from a terrible starter deck each player will slowly acquire better and better cards. Some will allow them to buy more, while others might allow them to draw or remove cards from their deck. A strong deck typically performs some sort of combo using powerful cards.

Is Customizability a real word?

Gryn
Yes, and so is Winningest. As in “I’m usually the winningest player.” 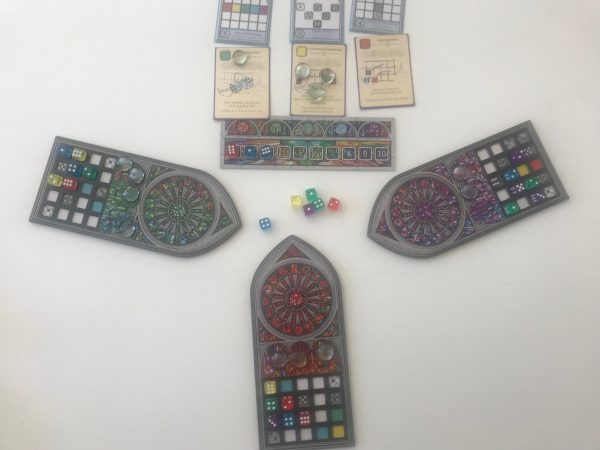 Millennia ago, players randomized their games with bones and wood. Depending on the side that came up, certain rules would come into play. Not much has changed in today’s game world. Dice infuse a game with suspense and the element of surprise. Players try to combine strategy and probability to match symbols, fight monsters, or mark their board. The possibilities are almost limitless. 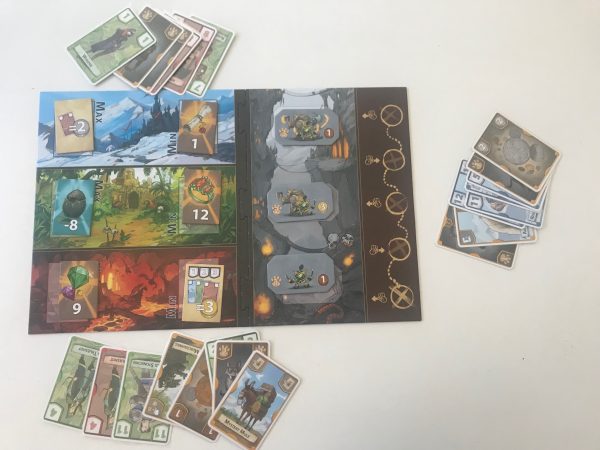 “That’s mine!” “No, it’s mine!” Drafting games use a codified set of rules that, hopefully, allow players to divide items between themselves without too much arguing. In a draft game, players carefully pick tokens or cards from a limited pool, trying to create the best collection possible. Often drafts use hands of cards, wherein players pick a card, then pass the rest of their hand clockwise, creating a rotating system. Canny drafters will keep track of what’s passed around so that they can plan their picks ahead.

Gryn
This game has goblins! You can never have too many goblins in any game! 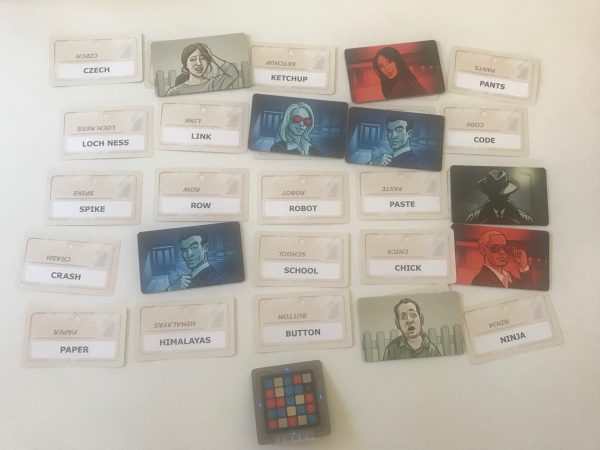 Put on your detective badge, interpreting clues are integral for guessing games. These games utilize your deductive reasoning skills to guess the actions of other players. Usually players work in teams, with one player giving clues to the other. Other times a single player gives a clue to others, usually hoping only a few players will correctly interpret it. If you are a skilled wordsmith, or have a canny mind, you will do well in guessing games. 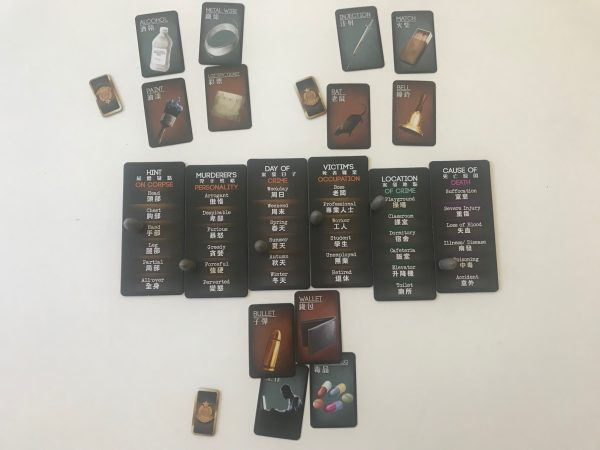 There’s a spy in your midst and you think it might be grandma. No, you’re not paranoid, you’re playing a Hidden Roles game! In these ever-popular titles, players are secretly assigned to teams without knowledge of who is and isn’t an ally. Players must then collaborate on tasks with the possibility of someone sabotaging the process. Using deductive reasoning, players must attempt to figure out who they can and can’t trust. If you have a good poker face you will be fooling your friends in no time.

Gryn
Why don’t you like games with Hidden Roles, Grump?
Everyone always thinks I’m one of the traitors! 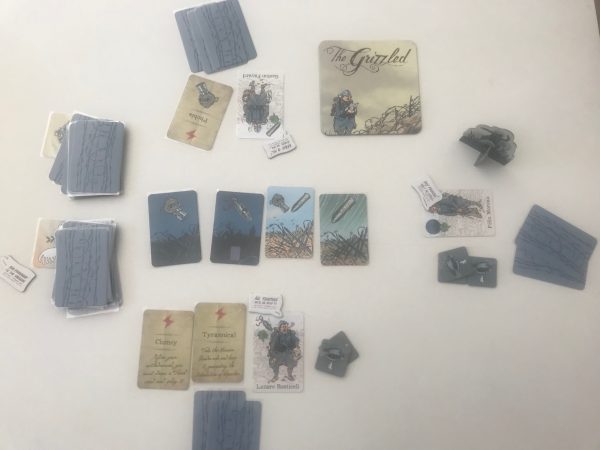 The treasure is tantalizingly close and you know it! It is just a few levels down with a few poisonous snakes and traps in the way- what could go wrong? The Press Your Luck mechanic asks players to judge the risks and rewards of their plays, allowing them to decide their own fate. This might involve players flipping reward cards until they hit a penalty which then erases their progress. Players with a mind for statistics can often judge how many cards or turns are left, then base their strategy on that. Still, Press Your Luck games are often very newbie-friendly, giving the boldest a better chance at success. 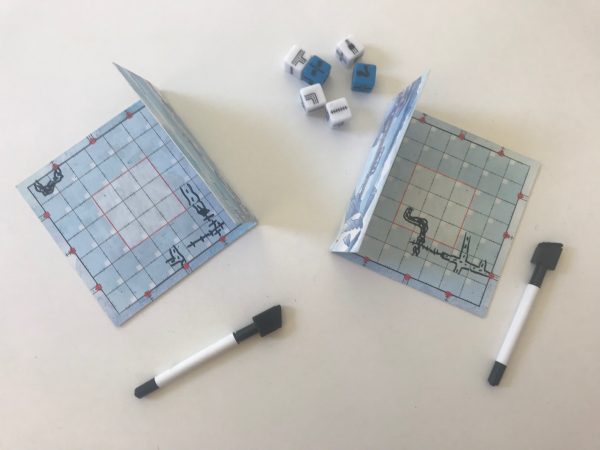 It is often surprising to new gamers to hear that Roland Right has designed so many games. But we are, after are in the middle of a new golden age of Roll and Write games! It’s a bad pun, but you won’t be surprised how many of these games with this mechanic you’ve already tried. Like Yahtzee, these games include a randomizing element like dice that players roll each turn. After rolling, and possibly re-rolling, players use pencils to mark spaces on their board. The goal is often to mark a specific number of spaces in an area to score a number of points. The real fun comes from cleverly predicting the random dice, or using the symbols better than your opponents. 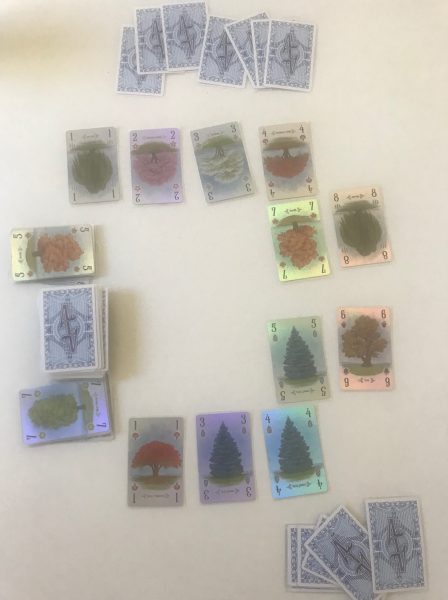 One is good, two is better, but three is great. As with collecting in real life the more the better. The Set Collection mechanic rewards players who are able to collect several of the same type of token or card. Like getting multiples of a kind in poker, the more you get the more you earn. Often, these games require players to balance a limited number of items “in hand,” forcing them to pick and choose what to keep and work towards. Among the oldest of mechanics, Set Collection can be implemented in nearly any game. 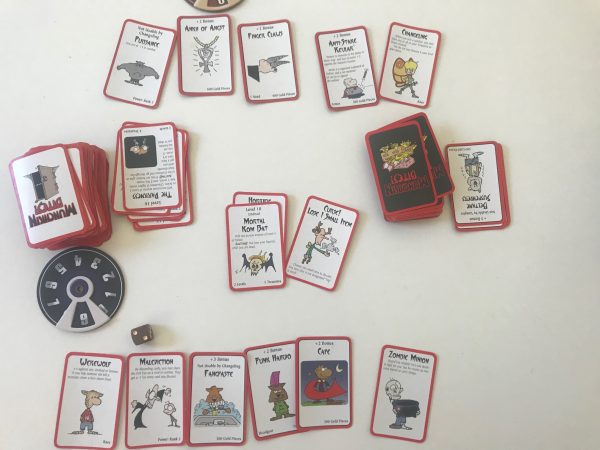 Are you the kind of player who loves to throw cogs in other player’s machines? If you grin with glee about trashing your friend’s hard-fought plans, you will be a fan of Take That! games. These titles take pride in allowing players to directly mess with each other’s plans; play nasty tricks, invade their area or steal their stuff. The sneakiest players will convince others that they’re not a threat worth attacking.

When I steal your gold in a game it’s fine, but in real life it’s not? Back in my day… 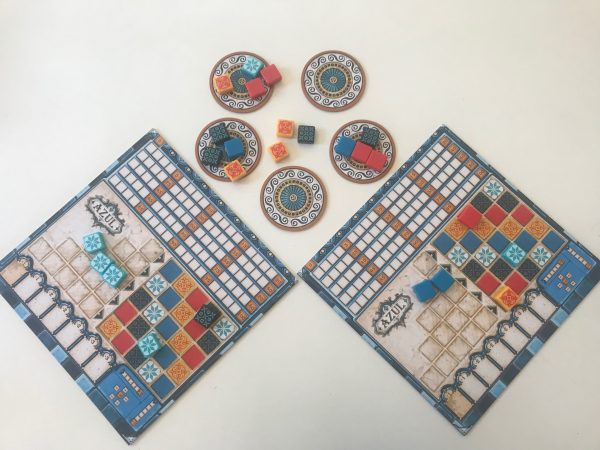 If you were to make Tetris into a board game, it would be a tile placement game. With this mechanic, players attempt to strategically place tiles onto their board, creating patterns or covering up symbols. Skilled players will create interesting patterns of interlocking tokens, often with a limited number of pieces. 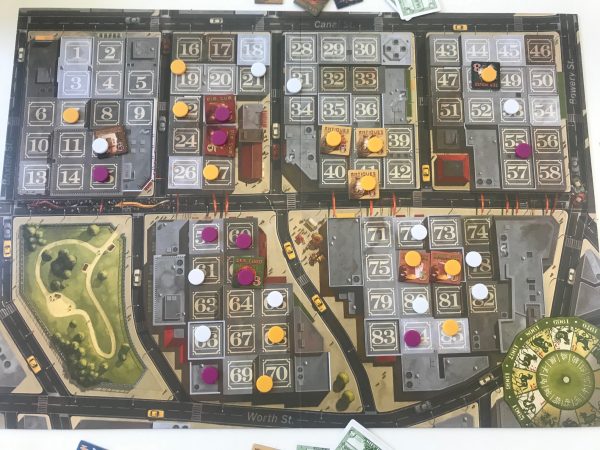 “I’ll give you two quarps for a doodlewig if you promise to trade me that wingding next round.” While you might not have not ever have heard of any of these goods, the essence of the trade shines through. Regardless of the theme, trading games emphasize player interaction through the exchange of components and favors. While it might be difficult knowing the value of any given piece, the silver-tongued will quickly convince you to make a favorable deal with them. 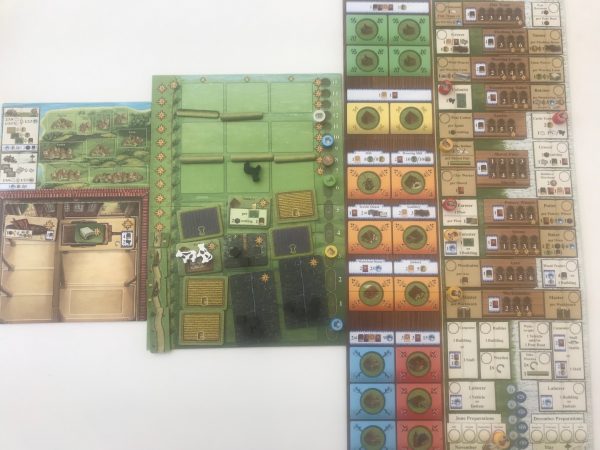 The truly successful know how to delegate. If you’re interested in bossing around a group of little wooden people you’ll be perfect for Worker Placement games. Simply put, players utilize a small number of tokens to perform actions, placing them on spaces on the board. Unlike a typical game with action points, options are typically limited. When a player places a worker they cover a space that other players might use, blocking it. This competition means that you’ll rarely have access to all the options you might want on a turn. Success depends on quickly determining when and where to place your workers.