Catan: A Euro Game in America 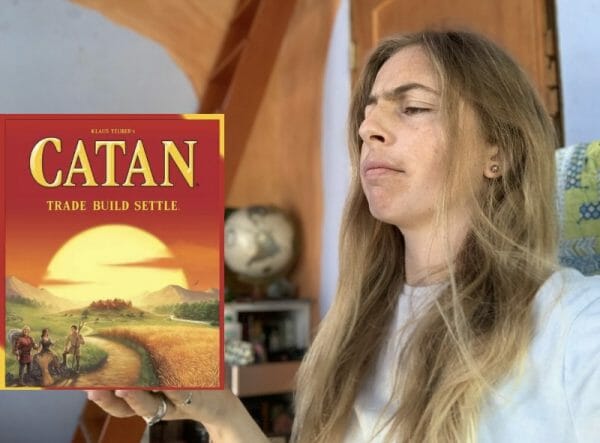 Catan, first released in the US in 1996 as Settlers of Catan, is known as a “Euro-style” game. These games focus on a slow amassing of points, development of strategy, and cunning adaptation. Catan, like other games of this style, is not head-to-head competition, nor does it involve high drama or aggression. Catan arguably defined this genre. The international popularity of Catan made Euro-style games a must-have in homes and stores. When Americans get their hands on Catan, however, everything changes. Oh, the game is still strategic and cunning and all that, but the drama, the backstabbing, the grudges; suddenly the elegant game of resource gathering and management is an all-out competition.

Let me tell you a story.

Our scene opens on a November night, upon a family sitting around a table under a large center light. Four people prepare to begin a game: my boyfriend’s father, boisterously complaining that “there are so many little pieces here, for the cat to eat;” my boyfriend, sighing at the language being used; myself, pretending I remember all the rules; and opposite my boyfriend, his mother, shuffling the clunky hexagonal tiles with deft movements. And in the center, a red box cover lies next to its contents, reading the outdated title of Settlers of Catan. We lay the tiles, each with a different type of land, randomly within the oceanic confines. We place the little black figure in the desert, shuffle the development cards, “elect” my boyfriend the banker, and roll to see who will begin.

My boyfriend’s father wins this first trial, and one after the other we place one settlement piece (a little house in one of four colors; I am yellow, the best color) at the intersection of any tiles we like, with a road leading off. My boyfriend, a repository of knowledge no one asked for and statistics no one else can remember, informs us that “statistically, between to six-sided dice, besides a 7, we are most likely to roll 6 or 8.” We survey our placement choices; on each of the land tiles, a number was placed – and according to what we rolled, my boyfriend’s father and I were poised in very good positions for earning two wood and two sheep, respectively, if a 6 is rolled.

Exactly one 6 is rolled in the entirety of the game.

Unaware of this eventuality, we begin true gameplay. Nearly immediately, I see that I have placed myself inopportunely for winning the Longest Road achievement. This would have gained me extra points at the end. No matter – I rarely play to win on these family game nights. Instead, I made for the ocean, and for one of the trade harbors scattered around the outside of the board. With these, I could institute a trade bargain with my opponents; two of any resource, and I give them some rocks. It seemed like an excellent plan. My boyfriend and his mother immediately square off as the main contenders. Within just a few rounds, his mother has the Longest Road achievement, and my boyfriend has invested in development cards. He draws the shuffled cards, and quickly gains the Largest Army achievement for receiving three knight cards. My boyfriend’s father, in a similar conundrum as myself, has only one consolation – the robber.

Throughout this game, we rolled an inordinate amount of 7’s. This meant that anyone with over 9 resource cards had to discard up to half their number, and the person whose turn is current gets to move the robber figure onto an opponent’s resource tile. This prevents any profit usually gained from that tile, and the robbing player gets to randomly choose a resourced card from their victim. With this, my boyfriend’s father and I have one advantage. We play not to win, not to destroy, not to humiliate – but to annoy, to inconvenience; in short, to enrage. We plague our savvier opponents with thievery and chaos. Yes, they outsmarted us in strategy and overall gameplay – but we are the ones laughing.

Eventually, the game turns a corner: the sheep all sheared, the wood milled, the bricks and stones arranged in gleaning cities, and the wheat harvested gold. The red and green settlements snake across the board, signaling the imminent race to the finish between my boyfriend and his mother. And suddenly, my boyfriend makes an unexpected move. He settles on a harbor, one that takes in three of any resource for one of his. With an unsettling, mischievous grin, he turns to his mother and says, “Let’s make a deal.”

He begins wheeling and dealing, stretching the boundaries of these trade harbor rules. At one point he essentially forces a deal with his father, enforcing his power as the only source of wood. I lose my mind. Words are shouted, the terrible insult of “J*ff B*ezos” is thrown around. A vitriol heretofore unseen was unleashed. I admit, I was harsh. I was blinded by rage. And yet, my boyfriend’s capitalistic treachery persists. He soon controls all ports within his half of the board with an iron grip. I am absolutely fuming, rolling 7’s with every turn with supernatural luck. I block his ores; his rage knows no bounds. His father stands aghast, watching the scene unfold with a mix of pride and horror. Nearly unnoticed, my boyfriend’s mother uses her turns to cut into his father’s already tiny kingdom, cutting him off from the one tile of wheat he desperately needed. When her operation is realized, his indignation knows no bounds. The true goal of the game is nearly obscured in our blind lust for vengeance. It is knock- down, drag out.

And suddenly, the last road of my boyfriend’s is placed, and he holds out his hand to his mother, palm up.
“What?” She asks, bewildered.
“I have the longest road,” he announces with pride.
Chaos, bewilderment, and vehement yelling ensue. My boyfriend does, in fact, have the longest road. By 2 points, he is the winner. The game ends, not with a bang, but with a shocked whimper. It’s over. The emotional turmoil hasn’t subsided – even the cat is fluffed out and glaring at the birdcage with a menacing hunger. And yet, as the four of us sit there, exclaiming and obsessing over the outcome of the game, a sense of satisfaction settles over us. There has been completion, true investment, and meteoric success. This, at least at our table, is the story of Catan.

A story, I hope, that you will tell next.

Socks Galten is the Runemaker of Goblin Bros. While she loves card games like Rummy and Wizard, she is learning most board games for the first time. Favorites include: Catan, Petrichor, and Stupid Deaths. She is a player and a Dungeon Master in several D&D games. Her cat did not eat any of the pieces involved in the above Catan experience. 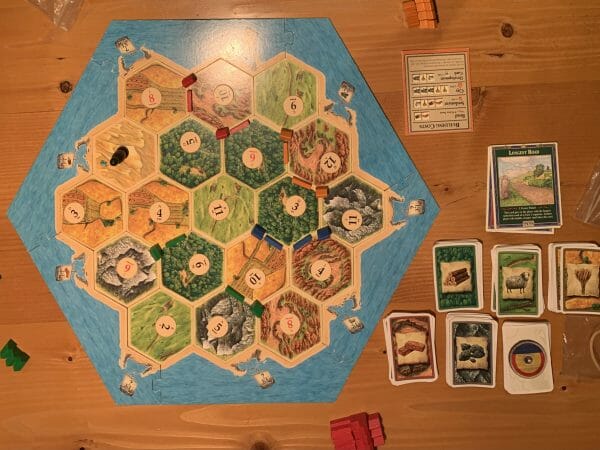