Build! Pray! Live! Between 1200 and 1600 CE, the French city of Troyes bore witness to some legendary and dramatic events. It endured the Black Death, the Great Fire, and the Hundred Years War. It saw the marriage of Catherine of Valois to England`s Henry V, and was freed from English rule by Joan of Arc nine years later. In the midst of this tumult, an ornate Cathedral of the High Gothic Style was built, and Troyes became not only an important trading center and the capital of Champagne, but temporarily the capital of France itself. Troyes invites you to experience four-centuries of this French city`s turbulent medieval history by participating in the development of one of the finest medieval cities ever to make its mark on Western culture – Champagne! Representing prominent family from the Champagne region of France, players use their influence to recruit and supervise individuals from the military, church, and civilian populace in their quest to build power and prestige among the principle players in the city. 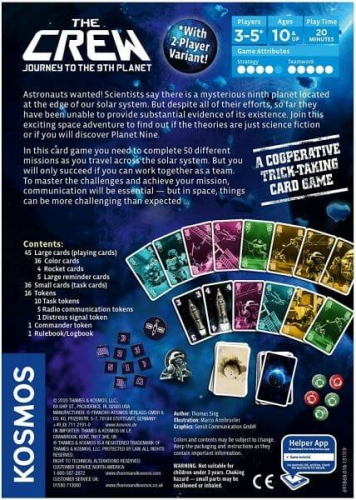 The Crew: The Quest for Planet Nine