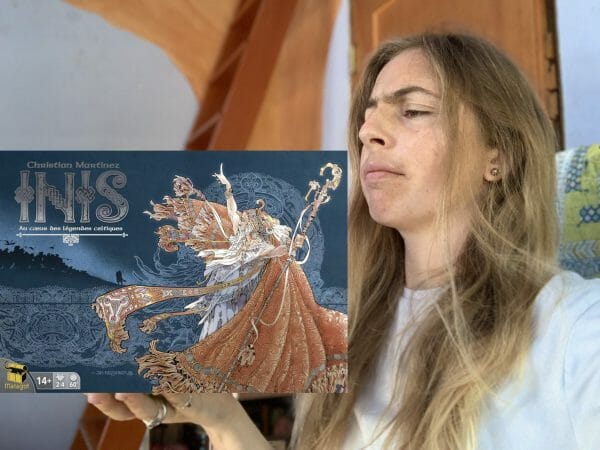 Inis, the area-control strategy game created in stunning detail by Christian Martinez, first debuted 6 years ago and has found new popularity with its newest expansion.The mythical, culturally rich board game is filled with strategy, magic, beautiful art, and a clear reverence for Gaelic and Celtic heritage. Even the name is pronounced “Inish,” the word for “island” in Gaelic. The island in question is built as the players grow their clans and clash for control of the territories, vying for the win conditions and trying to keep as many areas under control as possible.
Now, to be clear; I am half Irish, but I was born and raised American and thus all my Irish and Gaelic knowledge has been learned piecemeal by research, travel documentaries, and one family trip when I was eight. Similarly, my experience with strategic board games like Risk, Axis and Allies, and Inis was previously limited to “those are the games with a big map and little plastic men.” But, in trying to learn more about both my family history and board games in general, I picked up Inis to take the leap. I brought it home, showed it excitedly to my partner, and then gazed lovingly at it whenever I opened the game closet for the next 6 months. Every few weeks on a rare calm day off, my partner would suggest learning to play it.
“Oh,” I would say, “I don’t know, it would be a long game/I’m really tired/Oh would you look at the time I have to be anywhere else.” In truth, I am very timid to start complicated strategy games because it is a task that requires deep thought and layered thinking with which I am unfamiliar. But finally, my partner insisted that he and his sister and I all learn together, so that we could help each other figure it out along the way. I am so glad he gave me that opportunity, and I was right to think that Inis is a complicated game. My partner muttered to himself as he read the instructions while his sister and I punched out card after card of game pieces and organized everything. I would hazard a guess that it took us an hour to learn the basics, and even then, we had to refer constantly to the manual.
The basics are, very simply, a few different options of play during a turn. Firstly, the players divvy up the green Action cards, lay out as many land tiles (the art of which are so pastorally beautiful I want to frame them) as there are players, and pass the action cards around to draft a set of cards you want to play. You then determine who is the Brenn (the current controller of the capitol city, or a random person the first round), and they will determine the direction of play by flipping the special token for this purpose. In that direction, players use their action cards, which enact everything from combat to new land tiles to placing new figures (referred to as “clans”). After every player has either no more possible cards to play or no more cards, the round ends and the board is checked to see if any win conditions have been met.
In addition to action cards and placing clans, there are special effect cards of each land type. These yellow land cards belong to the person who controls that land tile. Finally, there are red Epic Tale Cards as well, each lovingly illustrated with a Celtic legend of gods and heroes and granting the player a more powerful option for an action. Once the player learns this color coding, there are rules about when a player may or may not play a card. Then add on pretender tokens, deeds, a Festival token, and the fact that a player must be conscious of not just their own sets of all these things, but their opponents’ as well, and Inis becomes very complicated very quickly.
All in all, the first game took us about 90 minutes, NOT including time to learn. Inis is one of the longest-form games I have played. However, I didn’t feel this was a drawback. The competition was fierce, the manual was very clear and had a surprising amount of conditions for “what if” scenarios, and while the game required some contemplation, I never felt bored or that the game moved on slowly. We ended up playing three full games, and my partner’s sister nearly missed her train for it.
As a board game beginner, I feel that my aversion to complicated rules was validated. Inis was both the deeply strategic game I expected, and also had just enough welcoming features (a well-written manual, beautiful art, and every element dedicated to the Celtic mythology) that I wanted to learn the complicated rules. Novices will find Inis a challenging, yet rewarding, entry into strategy games. If you already enjoy multi-layered strategy, area control games, then Inis is the perfect choice. The new expansion, Seasons of Inis, adds new lands, cards, and the option for a fifth player; room for more Goblins at the table!